This exhibition is devoted to the priest, collector, antiquarian and amateur artist Edward Thomas Daniell (1804-1842), a talented watercolour painter and etcher. The works on display cover his entire artistic career, taking the visitor on Daniell’s journey from Norfolk to Nubia and beyond.

The son of a former Attorney-General of Dominica, Daniell was born in London but moved to St Giles Street in Norwich with his mother after his father’s early death. He was educated at the Norwich Grammar School where John Crome (1768-1821) was drawing master. By the early 1820s he was already collecting works of art and in 1823 he went on a sketching holiday in Norfolk with the artist Joseph Stannard (1797-1830), who later taught him to etch.

Daniell read classics at Balliol College, Oxford, but during the vacations he spent time in London taking painting lessons from the artist John Linnell (1792-1882). He graduated from Oxford with a BA in 1828 and MA in 1831. In 1829-30 he spent 18 months on a tour of continental Europe, travelling as far as southern Italy via France, Germany and Switzerland. Daniell was ordained deacon at Norwich Cathedral in 1832. In the early 1830s he served as curate in the village of Banham, Norfolk, and continued to practise art, producing finely-observed drawings and etchings of local subjects and landscapes. During 1832 Daniell exhibited views of Italy and Switzerland with the Norwich Society of Artists. He also exhibited both at the Royal Academy in 1838 and 1839 and the British Institution in 1836, 1838 and 1839.

Ordained as a priest in 1834, Daniell secured a position in the parish of St Mark’s Church in Mayfair, and moved from Norfolk to Grosvenor Square in London. Daniell would regularly host dinner parties to which he would invite Linnell and many other distinguished artists, including J.M.W. Turner (1775-1851), who became a close friend, Edwin Henry Landseer (1802-1873) and David Roberts (1794-1864). Roberts travelled to Egypt and the Middle East between August 1838 and July 1839 and it appears that his resulting drawings inspired Daniell to follow in his footsteps. Resigning his curacy, he set off for Greece, arriving in Corfu in September 1840. In January 1841 he was in Egypt, travelling to the second cataract of the Nile and to the Sinai peninsula. By October he had reached Beirut, Lebanon, and in December he was in Smyrna, western Turkey. He joined a British surveying expedition to Lycia, southern Turkey, where he contracted malaria in May 1842 and subsequently died at the residence of the British Consul in Antalya on 24 September 1842.

This exhibition is made possible by the support of the Norwich Town Close Estate Charity, who have funded a works on paper digitisation project which has made thousands of art works, such as these by Daniells, accessible for the first time. 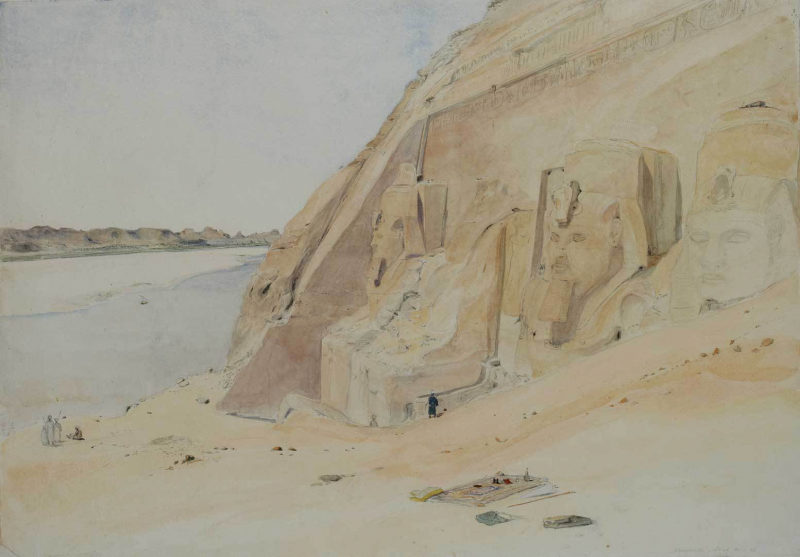