This major exhibition will gather together some of the most extraordinary and potent objects connected to Admiral Lord Nelson, reflecting his naval victories, his relationships and above all his affection for his native county of Norfolk.

At the heart of the exhibition is the Tricolour Ensign of Le Généreux, captured in February 1800 by the Foudroyant, Nelson’s flagship captained by Sir Edward Berry, also  an adopted son of Norfolk. When a ship is defeated the signal of surrender is the striking of the colours, removing the Ensign from the ship. The Ensign from Le Généreux was immediately packed up and sent to the Lord Mayor  of Norwich, Sir William Harvey and hung in St Andrew’s Hall until 1897. The Ensign was displayed in the Castle Keep in 1905 for the Centenary celebrations of the  Battle of Trafalgar, it has not been seen in public since.

The most iconic portrait of Nelson was painted by William Beechey in 1801 and hangs in Blackfriars’ Hall. A giant of a painting (261.4 cm x 182.6 cm), the life-size portrait was commissioned by the City of Norwich and recorded in the Chamberlain’s Accounts 1800-1, p 25, ‘Paid Sir William Beechey for Lord Nelson’s Portrait £210’. It depicts Nelson in his dress uniform, including the bicorn hat given to Beechey after the sittings by Nelson and donated  alongside the portrait, it forms part of the collections of Norwich Museums and will be displayed in the exhibition. Nelson is surrounded by symbols of his major victories, the sword of the defeated Spanish Rear Admiral Don  Xavier Winthuysen, surrendered at the Battle of Cape  St Vincent rests against a cannon draped with a Spanish Ensign. A French Tricolour Ensign lies on the deck at Nelson’s feet, representing the Battle of the Nile, in which the French fleet was routed with only 2 ships escaping destruction or capture, one of which was Le Généreux.

The inscription of the ornate gilded oak frame lists  Nelson’s many titles and also “This Portrait was  Presented by the Corporation of Norwich in Remembrance of the signal Services to his King and Country, and  Splendid Victories obtained under his Command by  the Union of the most Undaunted Valour and the most  Consummate Skill, in which the Superiority of the British Navy was decidedly manifested”

“These inarticulate mementoes illustrate and reflect with the  convincing forms of truth, the stern Admiral, the generous friend, and the unswerving  lover of his country” – Catalogue for the Earl’s Court Centenary Exhibition, 1905.

The Beechey portrait will stand in the centre of the  exhibition presiding over the other subthemes of the narrative. Each section will be based around a significant object, using the material to act as gateways to exploring facets of Nelson’s life; his relationships with his ‘Band  of Brothers’ and the crews of his ships, his innovative leadership qualities and tactical prowess as well as his personal relationships.

Key objects and sections will include his death and  funeral with the black velvet drape from his funeral car,  donated to the Sailor’s Home Museum by a Trafalgar  veteran in 1862. Standing beside this extraordinary  survival will be a uniform worn by a Greenwich Volunteer who guarded the coffin during the 2 day lying-in-state  at the Painted Hall in Greenwich.

“After the Battle of the Nile,  [scarcely a line – a note – a scrap  of paper bearing Nelson’s writing upon it was lost sight of.] Everything  relating to him was carefully  treasured up”
– Joseph Allen, Life of Nelson, 1852

One of the most fascinating elements of the Nelson story is the way in which his death, at the very moment of the victory of the Battle of Trafalgar, became viewed as an apotheosis. Nelson is described as being ’Immortal’ even before his death and the widespread public mourning and clamouring to commemorate his achievements and hold his conduct up as an example is expressed through the fine and decorative arts and also in textiles such as ribbons, handkerchiefs and in sailor’s crafts in the form of pin-pricked pictures and a model of the funeral barge made by a French prisoner of war at Norman Cross.

Nelson and Norfolk is the first major exhibition at the Castle Museum dedicated to the County’s most famous son and will bring together objects from Norfolk Museums’ own collections alongside objects from private collections which have been rarely seen in public. These objects will each act as touchstones to provide an insight into the  public and private life of a complicated individual who  led an extraordinary life. 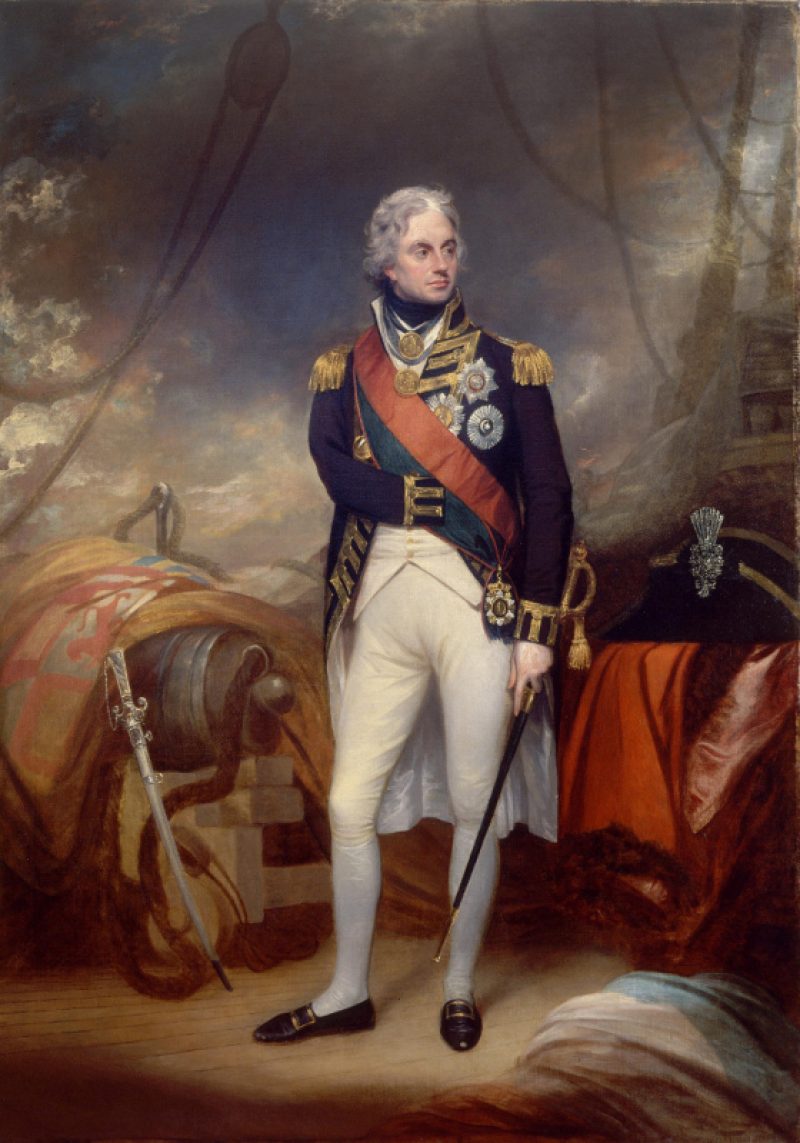