In 2017, Norfolk-based artist Tor Falcon began a new and ambitious series of drawings documenting the rivers of Norfolk along with their streams, trickles and ditches.

Rivers of Norfolk is shown in the Colman Project Space, alongside the work of the Norwich School of Painters. Like those artists some 200 years ago, Falcon walks to find her subject, making drawings outside, the scale and medium of the work dictated by their portability.

“The project started with a commission to draw the river Nar, which somehow led to a Wikipedia list of all the rivers of Norfolk, most of which I had never heard of. Deciding to draw all the rivers on the list is a way of looking at the familiar in a different way. Seeing the place I live in, through new eyes.” – Tor Falcon

This marvellous exhibition is in two parts. The second installation is now on show, featuring the Waveney, the Yare and the Great Ouse. The first installation, which featured the Bure, the Wensum and the Chalk Streams of North Norfolk was on display until 1 October.

“My understanding of the interconnectedness of the environment has grown as I’ve moved through the landscape, following watercourses. No landscape stands on its own, the high (for Norfolk) arable ridges where many of our rivers rise are an integral part of the story of our tidal mudflats. I see my drawings in the same way, each one is part of something bigger.” – Tor Falcon

The artist describes the endeavour as an education in geology, geography, history, environmental issues and conservation. Rivers are an essential environmental element, shaping landscapes, agriculture, villages, towns and cities. This project is fascinating, engaging and fundamentally interdisciplinary – we anticipate a broad audience engagement and appeal.

“I’ve talked to local farmers who have kindly given me access to rivers or told me about how they farm. I’ve talked to fishermen and people on boats, who I’ve met while out drawing. Everyone loves their particular river and wants to talk about it.” – Tor Falcon 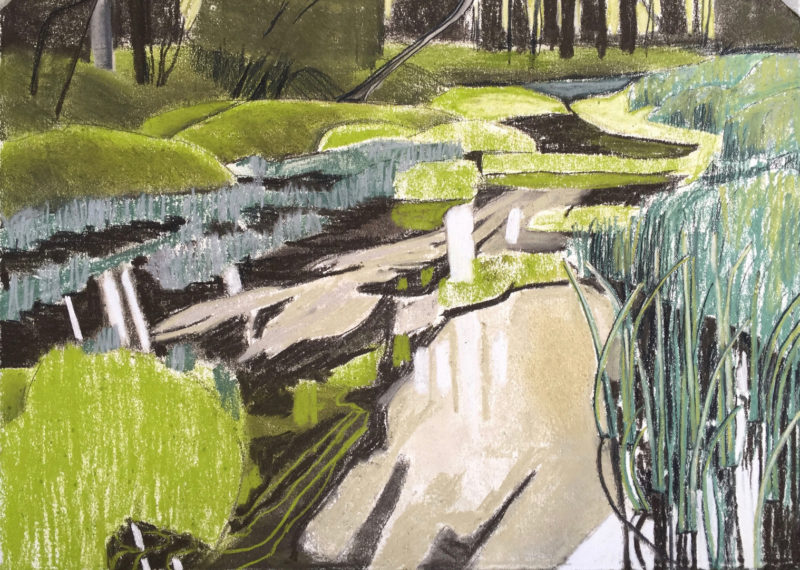