The true story of Lampião the infamous leader of a gang of bandits or Cangaceiros, has long-been Ron King's particular fascination. Lampião, together with his girlfriend Maria Bonita, ruled over huge parts of north-east Brazil in the 1920s and 30s and became the subject of many stories, songs and poems. The Cangaceiros were brutal, but achieved a Robin Hood-like status and are still dominant in Brazilian popular culture. Ron’s dark and angular sculptures, draw on the combination of terror which the bandits inspired, and the surprisingly detailed and colourful adornments of their bandit costumes, hats and sashes.

His preoccupation with these bandit sculptures has been a central part of Ron’s artistic practice for the past 50 years. Born in Sao Paulo, Ron lived in Brazil until the age of twelve, when he had to leave his home for boarding school in England. But Brazil and its culture never left Ron and for decades, alongside all the books, prints and sculptures he has made, much of his work, including this unique and impressive collection of bandit figures, has been inspired by Brazilian folklore.

Presented by FlipSide as a central part of its 2016 community engagement work, and in the year of the Rio Olympics, this striking exhibition brings o espirito do Brazil to Great Yarmouth!

Ron King is one of the modern-day masters of the Artist’s Book. Over a career spanning more than 60 years, Ron’s body of work, contains over 200 publications and many paintings and one-off pieces of sculpture. Ron set up the renowned Circle Press in 1967, and since then has produced books and print portfolios with more than a hundred artists and poets. The Press was saluted on its twentieth anniversary by a travelling retrospective exhibition to museums and libraries in Germany including the prestigious Gutenburg Museum in Mainz, and on its thirtieth birthday by a large retrospective, ‘Through the Looking Book – Artists at Circle Press 67-97’ at the National Theatre in London.

Ron’s work is internationally recognised and in major public collections all over the world including the V&A, British Library and Tate in the UK, and numerous US and Canadian collections including New York Public Library and The Yale Center for British Art, who hold the complete Circle archive. In 2002 Yale celebrated Ron’s 70th birthday with an extensive show of his work.

Ron has published every type of artist’s book from lavish one-off books to small pamphlets, poetry posters, pop-up books, wire books, concertina books and books made from wood, stone and glass mirrors! His wooden ‘Log Books’ Hollow Log, Tic Tac Toe and Termite Grid are characteristic of his inventive, three-dimensional focus and link to his series of wooden sculptures of Brazil’s infamous bandits of the 1930s, which form the substance of the proposed exhibition at Skippings Gallery, Great Yarmouth.

The exhibition of life size wooden sculptures, will be accompanied by archive material from Brazil in the 1930s, and a selection of Ron’s prints and artist’s books.
At 84, Ron continues to work and create in his studio on the coast of West Sussex, still producing books and focussing on large wooden outdoor sculpture. 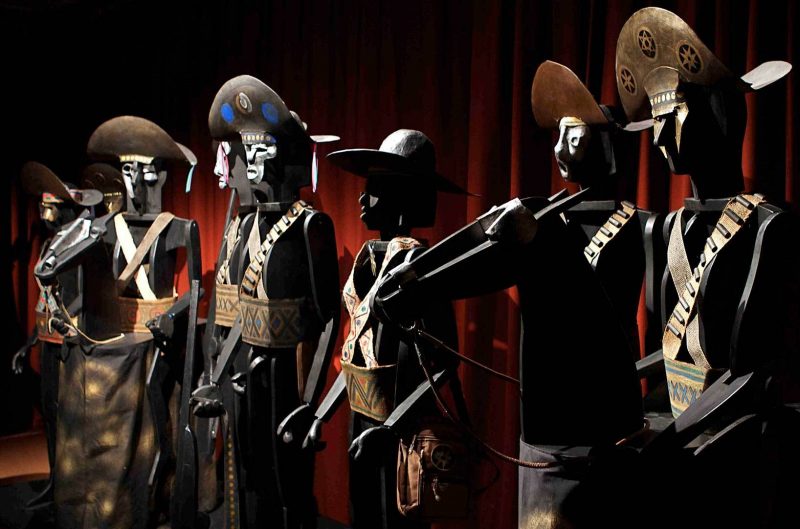